As a child Penelope Spheeris lived with her family in different trailer parks throughout southern California. She spent her teenage years in Orange County, graduating from Westminster High School with a daunting ‘most likely to succeed’ label. Working as a waitress at Denny’s and IHOP, she put herself through film school.

A holder of a UCLA Master of Fine Arts degree in Theater Arts, she worked as a film editor and a cinematographer before forming her own company in 1974. ROCK ‘N REEL was the first Los Angeles production company specializing in music videos. She produced, directed, and edited videos for major bands through the Seventies and Eighties, concluding her music video work with the Grammy nominated, Bohemian Rhapsody video for WAYNE’S WORLD.

Spheeris’ feature film debut was the 1979 documentary on the Los Angeles punk scene, THE DECLINE OF WESTERN CIVILIZATION which received stunning and unanimous critical praise.

The LAPD shut down Hollywood Boulevard and Chief of Police, Daryl Gates wrote a letter demanding the film not be shown again in L.A. Still fascinated with the subject of punk rock, she wrote and directed SUBURBIA, her first narrative film in 1983. It is a disturbing and somewhat prophetic story of rebellious, homeless kids squatting in abandoned houses, trying to make new families, and protecting one another. SUBURBIA won first place at the Chicago Film Festival. Almost 25 years later her documentary, THE DECLINE OF WESTERN CIVILIZATION, PART III would eerily mirror the events she scripted in SUBURBIA. 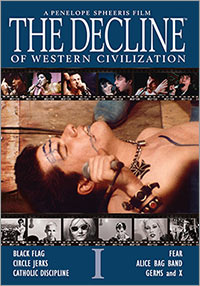 In 1984, THE BOYS NEXT DOOR starred Charlie Sheen and Maxwell Caulfield. It is an anti-violence film that showed how perfectly normal looking boys whose anger has long been repressed, can be walking time bombs.

In 1987 DUDES, starring Flea, Lee Ving, John Cryer and Daniel Roebuck, is about alienated punk kids who discover a sense of values while setting straight the death of a friend.

In all of these films Spheeris reveals the desolation of youth and the American dream gone bad. They depict stories of young people experiencing traumatic pain and alienation.

THE DECLINE OF WESTERN CIVILIZATION, PART II: THE METAL YEARS was released in 1988, again to spectacular critical acclaim. It is a caustically hilarious look at the LA heavy metal scene. Commentaries from Ozzy Osbourne, Steven Tyler and Joe Perry, Alice Cooper, Lemmy of Motorhead, Poison, etc. accentuate the mostly unknown metal bands who perform the music. It features a spectacular performance from Megadeth and the scene with W.A.S.P. rocker Chris Holmes and his mother will probably remain one of the most memorable pieces of rock film history.

In 1991, Spheeris directed her seventh feature and her first studio film, WAYNE’S WORLD at Paramount Pictures. Subsequently she directed and produced THE BEVERLY HILLBILLIES (Fox). She scripted and directed THE LITTLE RASCALS (Universal). BLACK SHEEP (Paramount), SENSELESS (Dimension).  THE KID & I and BALLS TO THE WALL were to follow.

THE DECLINE OF WESTERN CIVILIZATION: PART III was filmed in 1997. Documenting the contemporary punk rock scene, most of the kids in it were not yet born when the first installment was filmed. DECLINE III focuses on social issues rather than music. Most of the subjects are crusty gutterpunks, proud products of a society truly in decline.

Soon after Spheeris traveled with many prominent metal bands to document in Hi-Def the OZZFEST and the reunion performances of the original Black Sabbath. The crew traveled through twenty-eight cities, each with crowds of thirty to forty thousand. Both as director and one of the cinematographers, Spheeris achieved a remarkable and historic film which offers the audience a unique view of life on the road: WE SOLD OUR SOULS FOR ROCK ‘N ROLL. 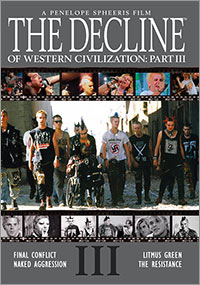 At the request of fans around the world, Spheeris and Producer/Daughter, Anna Fox, released the DECLINE TRILOGY on both DVD and Blu-ray in 2015. Shout Factory is the distributor. Penelope and Anna are currently working on Decline IV as well as a documentary about an incredible woman named Gypsy.